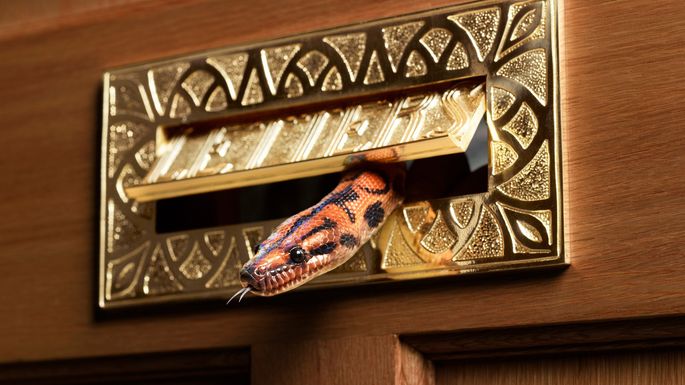 Real estate agents have heard all kinds of questions from home sellers, from "How much is my home worth?" to "Should I take that lowball offer or hold out for something better?" And most times, agents are happy to field these queries because they're there to help.

And yet, every once in a while, agents hear a doozy that leaves them speechless. As proof, check out some of the craziest questions real estate agents have heard that just go to show that, yes, there is no stupid question—but there are plenty of really, really odd ones.

1. ‘Can you keep an eye out for my lost boa constrictor?’

Seattle real estate agent Matt Parker has dealt with home sellers with cats and dogs, but the homeowner with a snake—specifically a boa constrictor—made him uneasy.

"The home seller informed me that he'd lost the constrictor in his house," explains Parker, who did not feel any better when the sellers added that he needn't worry, because "it should be able to find plenty to eat."

Parker kept his eyes peeled for the MIA pet more out of fear than to arrange a reunion. “The house ended up being torn down,” he says. “We never found [the snake].” Wait, what?

Joshua Jarvis, founder of Jarvis Team Realty in Duluth, GA, recalls one particularly uncomfortable consultation with a home seller who, during an initial walk-through of the house, showed Jarvis a dance pole in the master bedroom.

“There was a stage around the pole,” Jarvis recalls. The seller "told me how it provided her great flexibility and stamina. For a good ol' Southern boy [like me], I can tell you my face was about as red as the carpet.”

Furthermore, “she told me about how her husband just loves to watch her ‘work out’ on the pole and how her daughter now knows how to dance on it,” Jarvis says. "I'm sure at this point sweat drops were running down my face."

When he and the seller couldn’t agree on a sales price, Jarvis ultimately passed on the listing. He figured it would be even more awkward to have to explain the pole to potential buyers.

3. ‘Should I bury a Saint Joseph statue in the front yard?’

Some people use conventional methods to sell their home—marketing, social media, mailers, open houses—while others turn to their faith.

“I've had the Saint Joseph question a few times over the years,” says Los Angeles–based real estate agent Kathrin Nicholson. As it turns out, a number of home sellers do, in fact, believe burying a statue of Saint Joseph in their yard will help them sell their house.

"Typically it's homes that are languishing on the market," says Nicholson. In other words, desperation makes for an open mind: "For whatever reason the owners are trying what they can."

4. ‘I filed an insurance claim after a hailstorm, but used the money to buy a car. Should I fess up?'

Neenah, WI, real estate agent Linda Sanderfoot recalls when one of her listings was under contract, the seller revealed some unsettling news: In the past, the roof was damaged in a hailstorm, but instead of using the insurance settlement to make repairs, the seller bought a new car.

"Because the hail damage was something that would be spotted during a home inspection, the client asked me if I thought the buyer would ever find out," says Sanderfoot. “I told them that I hoped the car was worth it and that I couldn't give them legal advice."

The seller eventually disclosed this information to the home buyer—the night before the home inspection.

“Believe it or not, the buyer’s home inspector said that he could see a little bit of hail damage but nothing that concerned him enough to say the roof needed to be replaced, so we went on to close,” says Sanderfoot. "But the whole thing made me highly uncomfortable."

5. 'Would you walk our two dogs while we're on vacation? Don't worry, they don't usually bite.'

Chicago real estate agent Sean Conlon loves dogs, but he has his limits. When his clients asked him to walk their two 100-pound dogs while they were on vacation—and added that it takes time for them to warm up to strangers—Conlon politely declined.

"My first thought was to tell the sellers to send the dogs to a local camp for wayward dogs," Conlon says. "But I ended up referring them to a great dog walker and boarder."

Unfortunately, even when the sellers were home, the dogs made Conlon's job difficult.

"I would ask that they clean up prior to showings, but inevitably I was always cleaning up a few toys," he says.

So, a word of advice: If you have pets, either take them with you during showings or drop them off at a neighbor's house.